Suddenly my social network feeds were filled with people turning their names into a red outline, 1980s-style movie poster. Considering how often a photo or meme goes viral on Facebook, I didn’t think much of it until Netflix sent me an email about a new show they thought I might like.

Stranger Things didn’t immediately catch my attention for more than the obvious ’80s nostalgia. The Goldbergs may have been closest to the renewed interest in recreating the era of Rubik’s Cubes and Sci-Fi, but when I started watching, I really had no clue what it was going to be about. I didn’t even know the genre.

Dungeons and Dragons! I never played as a kid, but I recognized the references in one of the opening scenes between four young boys. Soon enough, I realized that this show was going to be more along the lines of the horror genre than I like. Most of my favorite shows have an element of humor. That may have been what kept me watching: simply the ability to spot ’80s stuff I remember and laugh at the references.

That said, I finished watching this entire first series in two nights. “Okay, so it must be great, right?” It’s great if you’re a fan of The X-Files, Under the Dome, The Goldbergs, and a host of other mystery-filled thrillers, and there’s nothing wrong with that! It’s fun to be reminded of other shows and movies that we loved before.

It’s not a ground-breaking, television-direction-changing program. And that’s okay!

A lot of viewers are constantly on the lookout for a show they can be obsessively re-watch and create a new fandom around, but most often, that’s not the case. What Stranger Things does well is present interesting, sometimes clichéd, but fun characters. I know more than a few people who plan to dress up as a character from the show for Halloween this year.

The setting of the show is fictional Hawkins, Indiana, and it’s the real-life Jackson, Georgia that served as the filming location. Any Indiana native can attest that the trees and shrubberies are sometimes noticeably “not quite Indiana.” There really isn’t an attempt to bring much Indiana into the show. It just really serves as a very “middle of nowhere” location that makes it a little spookier. 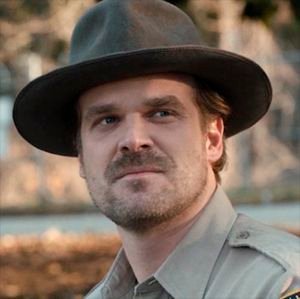 My award for Best Series Character goes to Jim Hopper, played by David Harbour. He’s the kind of gruff, Indiana Jones type that really makes this series true to the 1980s.

In summary, I think you should watch it (unless you just can’t stand anything slightly creepy). It seems the first season wrapped up quickly but left room for a continuation that should give you something to look forward to!